A T-Shirt Company Tries On A Radical Idea: Tees That Fit Actual Women 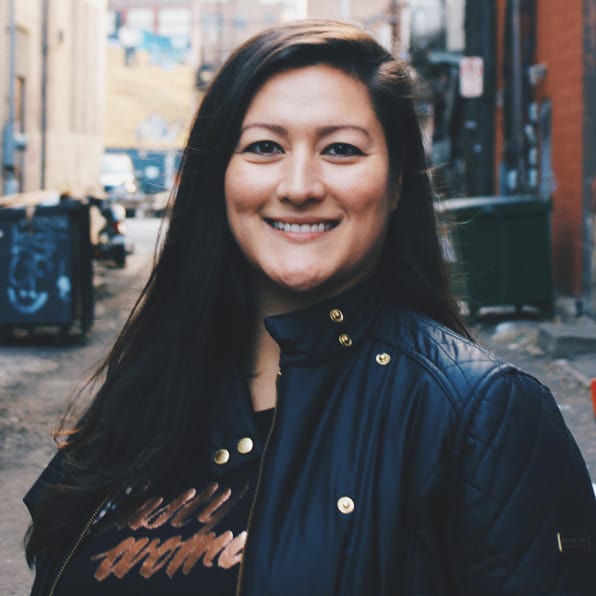 If you’ve ever purchased a T-shirt associated with a podcast, an independent editorial website, or a conference focused on making things, you likely own one made by Cotton Bureau. Just four designs from the Crooked Media podcast network add up to nearly 38,000 of the 300,000 shirts the company has sold to date. In checking my drawers, I have at least 20 different designs, about half associated with podcasts and publications I’m connected with. A men’s large generally fits my torso fine, though not perfectly.

I’m in the sweet spot, and I know it. T-shirts generally fit a narrow range of body types that is far shallower than the diversity of volumetric space that something like half of, if not more, people occupy. The sizing and fits are tilted toward men and a very specific small female frame. Most premium T-shirt companies ignore sizes beyond 2X, especially for women. Cotton Bureau fields a lot of complaints about this.

“People use the phrase: ‘I need you to make a shirt that fits us real women,’” says Michelle Sharp, who handles marketing and operations at Cotton Bureau. Tees might be too boxy in shape, customers say, or too tight around armpit and shoulder. For her, it’s personal. “Our largest women’s shirt is nowhere near fitting me.”

Nathan Peretic, the co-owner of the Pittsburgh-based company, says that half of their female-identified customers order men’s shirts. Jay Fanelli, the other co-owner, pins this squarely on American Apparel, the now online-only retailer, which, during its retail heyday in the 2000s, “decided that junior sizing was where it was at with women’s T’s.”

He says that American Apparel’s sizing practice spread, and wholesalers like Next Level Apparel—Cotton Bureau’s primary source—and Alternative Apparel adopted the same scale. “All their women’s shirts pretty much fit the same, and they’re all too small,” he says.

This isn’t a secret, especially to the large percentage of women and many men who find themselves at odds with both the size and fit of T-shirts. It’s not hard to find the sentiment among one’s friends and colleagues, or on the forums of podcasts and other projects that sell shirts to their fans. Cotton Bureau says it’s served 150,000 customers since its inception, and it knows how many of them returned shirts, and suspects many more got away because they didn’t order in the first place.

The company has set out to change this in a small way, starting with new designs that will ultimately replace about 75% of the T-shirts it sources today. And it hopes to have an even bigger impact in changing expectations, even as the bespoke, made-in-the-US shirts will cost it roughly 50% more to make than the shirts it now purchases.

The quest began last year, after Peretic and Fanelli accepted their first investment, of $500,000, and used an undisclosed portion of this to begin development. The mission: create new fits in an unusually wide range of sizes, eight each for women and men’s styles: XS (extra small) all the way up to XXXXXL (5X).

Sharp, in charge of the team pursuing a new design, surveyed shirts available in the quantities and qualities the company needed—keeping in mind its guidelines for labor conditions and wages—but kept coming up empty-handed. “Why doesn’t this already exist?” Peretic recalls thinking. “I guess we have to do it ourselves.”

It launched a Kickstarter campaign last month to cover the raw costs of making an initial batch of “size-inclusive” shirts (but not the R&D it’s already invested)—$48,000. Funders who give $25 get one T-shirt; three tees come with a $75 pledge. The campaign reached its goal within about a day, and as of this writing, is 50% over its goal, at over $77,000. Cotton Bureau has set new funding goals that “unlock” new colors and styles: black and white cotton and black and grey triblend, but also navy, blue, and red triblend too.

Kickstarter trends suggest Cotton Bureau is likely to finish at two times its goal. Sharp isn’t completely surprised. “Nobody has made this fit that works for women in this size range, in this quality of fabric, in the colors we’re trying to do.”

The fit problem isn’t just about plus sizes. A quick scan of a cross-section of humanity, even those who don’t identify as women, reveals that most torsos and T-shirts don’t get along as well as they could. Given the small sizing of T-shirts to begin with, a large percentage of women wind up excluded from a fit: those who are taller than average, with large biceps, or have shorter or longer torsos than the narrow range T-shirt makers cater to.

Men have fit issues too, Sharp says, though not as many: “The way men’s shirts are made is a little more flexible, but also the way that they’re graded between sizes.”

T-shirts are one of the basic commodities of independent creators—the prison cigarettes of the startup economy. For a unique shirt, sometimes in a limited onetime edition, supporters of an artist or other maker are often willing to pay a premium price, around $25 to $30, sometimes higher. The raw shirts cost roughly $3 to $7, varying by supplying, color, fabric, and size. Add in silk screening, shipping, and overhead, and there’s still substantive cash for the creator’s take from the sales. These shirts often also serve as cultural markers for identifying like-minded people, to say nothing of free marketing.

Cotton Bureau isn’t by any measure among the biggest independent T-shirt makers, but it has carved out a seemingly ample niche by focusing on strong designs and high-quality shirts and printing. A previous overlapping company that Peretic and Fanelli ran, United Pixelworkers, worked directly with designers to develop shirts, helping to forge bonds with web and print design and illustration communities. (The two shuttered United Pixelworkers to focus on Cotton Bureau, which had far greater growth.)

While the privately held company doesn’t disclose revenue, Peretic says its 2017 sales are on pace to double those in 2016, and it’s grown from six full-time employees a year ago to 14 full-time and three part-time today.

For each shirt it offers, Cotton Bureau runs a tiny crowdfunding campaign, and it has about 120 campaigns live at any given time, Peretic says. The company accepts unsolicited design submissions, and doesn’t take any rights in the submissions. It also works directly with creators with a track record, which includes The Incomparable, an avocational podcast network in which I participate. (We’ve sold hundreds of shirts via Cotton Bureau featuring zeppelins, robots, and dragons.) The company then posts designs that meet its quality and content standards and that it thinks can sell enough shirts to cross a threshold to be printed.

While some shirts sell in the thousands, the median is roughly two dozen. This long tail means the designs are intensely personal to the creators and those buying them.

It’s this high-margin, high-touch niche focus that makes it rankle for the company all the more that they’re not suiting many of their customers adequately, says Peretic.

The upgrade has also been a lesson in cutting-edge clothing manufacture, which, Cotton Bureau says, remains a very manually intensive industry. It found a supplier in Los Angeles that could meet its design, ethical, and production needs.

Because designs are managed in digital form, Sharp says they could make rapid changes to patterns based on last-minute feedback from beta testers. The company hired a veteran patternmaker, Melanie Yi, to ease that part of its journey.

A Resizing Of The Business Too

Beyond the shirts Kickstarter backers will get, the campaign will fund the first couple of runs so Cotton Bureau can build up a back stock of what it needs, and ramp up into rolling production, Peretic says. This marks a shift in capital needs, as the company previously relied on just-in-time ordering from distributors. Now, the company will have to work backwards in predicting demand, pay upfront for manufacture, and have raw shirts sitting unsold in warehouses.

Eventually, Cotton Bureau says it expects to become a distributor to other T-shirt makers, but the current plans don’t focus on this until many months into the future, after the company has sorted out its own needs and made sure it can deal with the ebb and flow of working directly with a clothing maker. Fanelli says what it will need to charge at wholesale for its shirts will keep volume low relative to the size of the industry. “The truth is, going through us for these shirts is not going to be cheap,” says Fanelli. 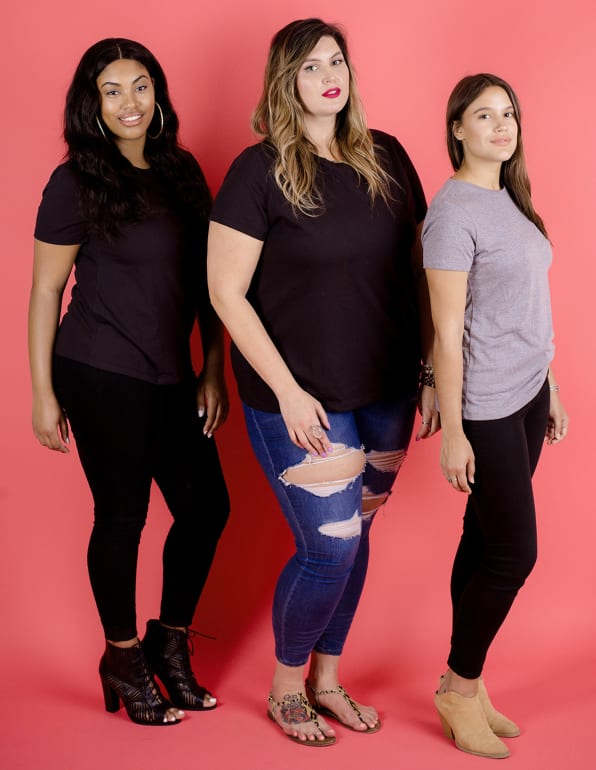 Blank plays into a new iteration of the long tail that has a deeper tradition in American retail than in e-commerce. Nordstrom was founded as a shoe store in 1901 during the Klondike Gold Rush, and sold only shoes until 1963, when it began to expand into clothing. The retailer was and remains known for carrying the full extreme of shoe sizes, even though it can’t possibly sell many at the end of the long tail—how many 18EEEE shoe wearers are there?

But people shopped at Nordstrom, because they knew they could leave with a shoe that fit—including the rare policy of selling two separately sized shoes for the same price as one pair for people with uneven feet. There’s a potential for Blank to achieve the same sort of coup with its new offerings: 16 shirt sizes across several color/fabric mixes is a lot to encompass, as some of the sizes will sell very few. 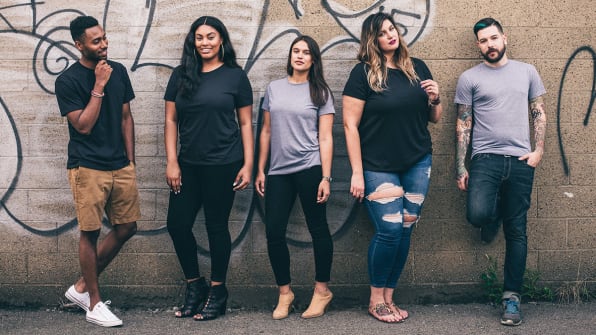 If all goes well, the company will gradually roll out beyond the over three-quarters of unit sales this first set represents into other colors, fabrics, and cuts. However, these new shirts could grow as a percentage of sales if they hit the new fit correctly: More people will buy shirts in those sizes and styles as word spreads.

One concern: The first batch is all crew necks. Why no V-necks? The Cotton Bureau staff laughed long and hard about this. “That’s our biggest question,” Sharp says, as many women prefer a V-neck style. It’s on the list. 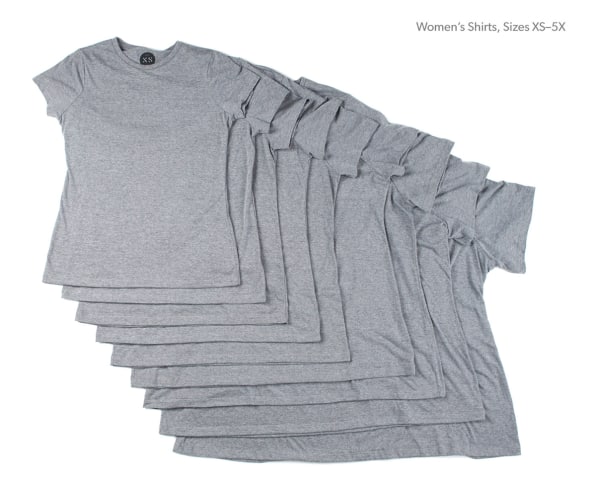 If Cotton Bureau nails the fit for most people, it creates wins on several fronts: It sells more shirts; it becomes more attractive to designers and projects that want to encompass fits for all genders; and each new customer it acquires happy with the comfort of a shirt they buy has the potential to become a repeat customer.

It’s a big order to fill, but the company has cut the task to the right size to avoid pinning their entire future on it. And even if Blank remains a modest project that mostly helps Cotton Bureau cater better to its customers, it’s brought attention to a widespread problem. Maybe it’s time for the garment industry to make a solution that fits.